For more years than we want to remember, it has seemed as if salvation for the historic downtown Wilkes-Barre train station was always just out of reach.

After interminable legal delays over development of surrounding parcels, and then a stalemate with the previous mayor over reprogramming an idle $1 million state grant, 2020 brought rays of hope.

New Mayor George Brown signaled to developer George Albert that he supported transferring that grant to the project, and on a hot July day Albert and a team of volunteers clawed back the boards and went into the Victorian structure to begin a thorough clean-up.

“We’re poised to start renovating this building before the end of August,” Albert said as a swarm of volunteers carried mattresses, garbage and mounds of other debris from the old station during a community clean-up on that summer Saturday morning.

“We’ve secured our funding, so that’s really the push for this effort today,” Albert told the Times Leader.

The funding Albert referenced is a $1 million state grant he and his group, Market Square Properties Development LLC, have asked to be reprogrammed to the station from the city-owned former First National Bank building on Public Square that Albert wanted to buy for a high-tech hub.

The group’s plan, Albert said last July, was to restore the station for office space and potentially also to host a Luzerne County visitors’ center and Planters Peanuts historical display, which Brown has been backing.

“There’s absolutely no way that we’re going to begin any work without knowing the destiny of the building because, quite frankly, if we don’t have tenants we prefer just to simply raze the building, but that wasn’t our intention when we bought the property,” Albert told council.

The destiny in question involves a proposal for the county’s tourism and visitors’ bureau to occupy first-floor space in the 1869 station on Wilkes-Barre Boulevard.

Again, that’s consistent with what has been discussed for several years.

Councilman Walter Griffith expressed support for the concept last week but questioned why the county is deciding on a lease now instead of waiting until renovation is nearing completion.

That’s when Albert dropped his destiny or destruction bombshell remark.

As he explained to Griffith, renovation will cost $1.4 million, or almost $350 per square foot, so despite the $1 million state grant his company is still going to have to borrow money to make the renovation a reality.

Albert added that the rent he is charging the county will not generate a profit, is “straight reimbursable on cost” and “very, very very reasonable” for the amount being spent on the property.

The initial five-year lease to house the county bureau in 2,100 square feet at the station is proposed at $15.43 per square foot, which amounts to $32,400 annually. The rent would increase to $16.50 per square foot if the county opts for two renewals at three years each.

The bureau spends approximately $30,000 on rent at its current smaller 1,300-square-foot site on Public Square. No county general operating budget funds are required for a lease because the bureau is self-sufficient, relying primarily on hotel tax revenue, officials said.

Meanwhile, Albert is working with a commercial Realtor on leasing the upstairs space.

Yes, we support the preservation of this historic Wilkes-Barre landmark.

Yes, we think the tourism office deal sounds like a good one for the community and the taxpayers, and council should OK it.

As for Mr. Albert: We understand that this has been a long and frustrating process for him and his business. Hinting at possible demolition if that deal falls through may just be heavy-handed negotiating, but it’s also deeply disappointing to hear, especially with a $1 million state grant in play.

We’ve lost too many historic structures in this community. This one is worth saving. 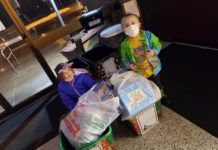 My Corner, Your Corner: Keep new restrictions in perspective

Their view: Treating overdose deaths like murder will only deter 911 calls for help