But with the first District 2 championship in school history approaching Thursday afternoon, the Warriors did not exactly slow down to savor every moment.

Instead, Wyoming Area had plenty of motivation to get done early Thursday.

Already racing to beat threatening weather, the Warriors were well aware as the 10-run rule became a possibility that finishing early could also save J.J. Hood’s eligibility to pitch in Monday’s state tournament opener.

Wyoming Area put it all together in the 11-0 win over Honesdale.

The Warriors stayed dry, celebrated a district title for the first time and kept Hood ready to throw again when they ended the game in five innings at Atlas Field.

“There are states Monday, so we needed to get J.J. out of there before that 75 pitch count,” said catcher Jake Kelleher, a junior who is already verbally committed to play National Collegiate Athletic Association Division I baseball at East Tennessee State. “Once the runs started piling up, we knew we needed to get the job done.”

They did so with the utmost in efficiency.

The Warriors took a game that was scoreless through 2½ innings and broke it open by scoring five times in the third and six times in the fourth.

With the finish line in sight, Hood put together a 1-2-3 fifth inning to end a 74-pitch outing that gives coach Rob Lemoncelli the option of sending him out to start the state tournament against District 4 champion Midd-West (16-5) Monday night at Williamsport’s Bowman Field at 6:30.

Hood threw a five-hit shutout with just one walk while striking out five. He never let a runner reach third base.

“He’s unreal,” Kelleher said. “Every game he comes out, you know he’s going to compete.”

Honesdale was coming in off a 3-2 upset of top-seeded, defending champion Dallas in the semifinals.

Three Hornets pitchers, however, all struggled, combining to walk nine in four innings, along with four wild pitches and a passed ball.

Though there wasn’t much to swing at, the Warriors still found pitches to hit, including five straight, fourth-inning hits, capped by a two-run Jack Mathis double and two-run Jason Wiedl single.

“We know that they’re a little bit wild and struggling to find the zone,” Wiedl said, “but, we still stay aggressive. Don’t help him out; don’t swing at junk, but when they put one over the plate, you’ve got to take your opportunity and drive one.”

The championship game was originally rained out Wednesday. Not long after it was moved to Thursday, the decision was made to push the starting time up to noon to create the best chance of getting done before predicted rain.

The Warriors wound up leaving themselves plenty of time to celebrate.

“It’s a big day for me personally, as a coach, being the first champions in school history,” Lemoncelli said, “but, more importantly, every one of those kids deserves the credit.

“They put the work in, day in, day out. They went through the good times and the bad times. The coaching staff put them in the right spots to succeed, but they’re the ones that had to go out, put in the hard work and they had to execute. 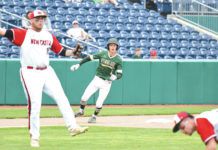 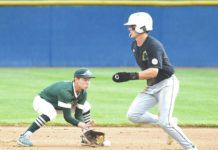