Crocamo: County open to exploring use of shuttered state prison

It’s possible the state would transfer the property to the county for $1. The county’s aging prison on Water Street in Wilkes-Barre has largely been running at double capacity since the 1990s and warrants expansion, county Correctional Services Division Head Mark Rockovich recently told council.

“I think it’s something we should at least explore to see if it is feasible and will help Luzerne County,” said Kaufer, R-Kingston. “Nobody wanted to see SCI Retreat close, and this may be a way of turning lemon into lemonade.”

County Acting Manager Romilda Crocamo said Rockovich and a team of others from the prison and administration will participate in an upcoming tour of the facility to assess its condition.

“After the tour, I will update county council. If it’s something council wants to pursue, arrangements will be made for council to examine the property,” Crocamo said.

Crocamo thanked Kaufer for his interest and for coordinating a tour.

“Luzerne County is open to any and all options that may benefit the prison and county overall,” Crocamo said.

County officials have sporadically discussed the possibility of a new county prison for more than two decades because the existing multistory Water Street facility requires significant maintenance and has an inefficient layout. Built in 1887, the facility was renovated in 1987 to add a five-story tower, according to past published reports.

Kaufer said a new county prison could cost $200 million, and finding a suitable location that won’t be challenged by adjacent property owners would be a challenge.

He reached out to the county administration and state offices late last year about SCI Retreat and is still in the process of scheduling the tour.

The idea of county occupancy of SCI Retreat first came up at the start of 2020, when Gov. Tom Wolf announced the facility would close based on his review of a state corrections department report highlighting infrastructure concerns at the complex, including replacement of the bridge over the Susquehanna River used to access SCI Retreat.

Then-county manager C. David Pedri had expressed reservations about the potential cost of repairs at SCI Retreat and expenses and manpower to transport inmates to and from court proceedings at the courthouse and central court, both located near the current county prison.

Kaufer said he is not yet sure what repairs are needed at SCI Retreat. Transportation may be addressed by using a portion of the current Water Street prison as a temporary stay facility for inmates scheduled for court proceedings each week, he said.

“If you were to have rotation once a week, you would not constantly have to run inmates back and forth to SCI Retreat because it is some distance,” Kaufer suggested.

Increased use of video technology in court proceedings also may reduce the need for transport, he said.

On the hurdle of the bridge, Kaufer said the state had plans to complete work on the span. Discussions could address whether the state would be willing to continue maintaining the bridge if the county occupied the facility, he said.

Kaufer said he reached out to officials familiar with SCI Retreat operational expenses and past staffing to provide information that could be useful to the county.

“It’s set up as a prison. Let’s see if it can be used again for that purpose within reason,” Kaufer said.

SCI Retreat closed in June, with the Pennsylvania Department of Corrections planning to minimally maintain the site.

According to prior reports, the Central Poor District of Luzerne County established an almshouse for the indigent there in 1878. A hospital for those with mental health conditions was added in 1900. The property was known as the Retreat Hospital for the Insane and Almshouse for 30 years and renamed the Retreat Mental Hospital in 1930. The county operated that facility until 1943, when it was transferred to state control.

The hospital formally closed in 1981, and it opened as a state prison in January 1988, the site said.

New county Councilman Brian Thornton worked as a project engineer early in his career and recently said a realistic infrastructure assessment of the county’s prison must be completed.

During a November budget presentation, Rockovich requested $11.8 million from the county’s $113 million federal American Rescue Plan funds to expand and repair the prison.

Crocamo told council at that time everyone knows a new prison is needed, but that long-discussed project is not in the plans at this time due to a lack of funds.

“I know we’re not getting a new facility. I’ve come to that realization,” Rockovich said at one point during his November presentation. He voiced that acceptance after contemplating the “hidden blind spots” throughout the multi-story prison that would be eliminated with a modern design.

Rockovich requested $700,000 in American Rescue funds for roof repairs, $7 million for a 100-bed addition to segregate and observe all incoming inmates, $1.4 million for more spaces to accommodate video court appearances and inmate legal consultations and $2.5 million to create a physical/mental health treatment area above the sally port dock.

The common belief the prison was designed to hold approximately 500 inmates is false, Rockovich told council.

The facility was remodeled for a capacity of 250 inmates, he said. As the population started rising in the early 1990s, officials switched to bunk beds in most cells and then later converted six day rooms into housing units capable of holding 10 inmates each, he said. 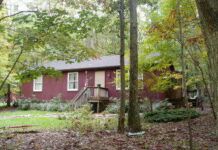 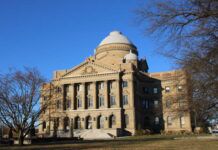 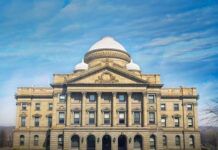